To be quite honest I had one too – exactly 11 days ago. Funny, it feels for some reason like months have passed already – maybe it’s the dark time of the year speaking. When days are so short with grey overcast skies and the Sun – on the rare occasions it manages to shine upon us – is always at some awkwardly low angles, the time seems to stretch out like cheese on hot pizza.

So I’m a year (and 11 days) older now – happy birthday me! Over 30 years later I’m living in the same city I was born in and not so far from the place I lived first years of my life. Some people end up on the other side of the globe, some people live whole lives in the same place, some people move about, but find themselves close to where they started.

Anyway, I decided to celebrate my birthday by inviting some people I like to take a walk in a bog with me.

When the coloured leaf fest of October ends, it kind of feels like everything has turned brown and grey and all the colour is lost, but when your eyes accustom to the relative monochrome a bit, you realize that there are gazillion tones of brown and grey, and that the evergreen is as bright as the leaves were.

The bog smelled great too. Of peat and brown water mostly. If you’ve got to name it. First thing one notices is the lack of smells. No exhaust fumes from traffic, no ever so subtle smells of garbage cans, people smoking, smoke from chimneys and thousand other things always present in densely populated areas. Most pronounced smell were the slightly intoxicating fumes of Marsh Labrador / Wild rosemary or Ledum palustre, if you will, at the beginning of the track.

I had been very well prepared and brought my rubber boots with me. As it turned out, the second half of the track was indeed under water. Although, for some reason I had neglected to put on said boots and begun the walk in light canvas shoes instead. The downside of this was not getting to walk to the end of the track. The upside was getting to peel off all footwear and stick my bare feet into the brown waters of the bog, known to preserve dead bodies for centuries (Tollund man), although it’s also true that said bodies are rarely ever to be found again from the depths of the bog. I’m pretty sure there was a fair share of dead people and animals mummified and resting in the brown depths in that very bog we walked upon as well. There was a lake in the middle. I wonder if it’s good for a swim in the warmer time of the year? 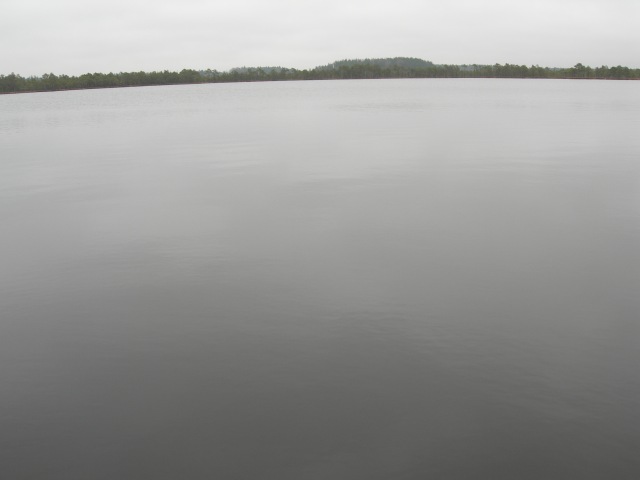 The weather was warm for November. About 7 C / 44 F, I think. The cold bit me back into the socks fairly soon, but my feet were nonetheless grateful for the experience. It’s good to get the real feel of outside temperatures, it’s good to have wood planks, grass, moss and bog water under your toes from time to time.

And as I’m writing this, only 11 days later, it’s snowing for the first time this year. I was already beginning to wonder, whether the snow intends to pile up as accumulating layers of frost instead the conventional way, for we’ve been living in a frost enchanted world for several days now, in anticipation of winter. 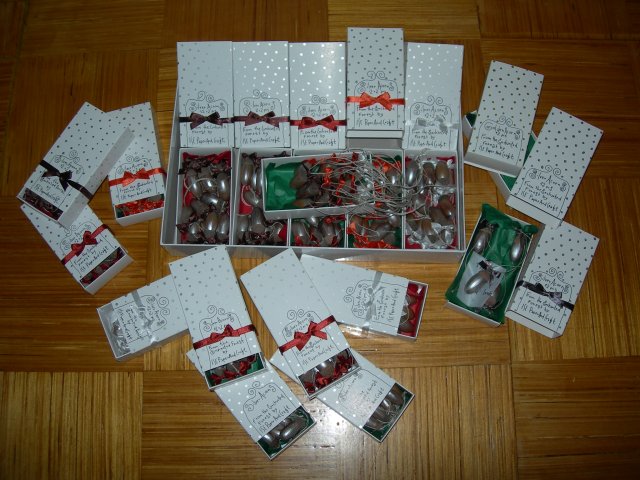 Most of this glory will be available in Helsinki. Everything is also theoretically available at the Etsy shop, but since the hanging cord has changed slightly into a thinner version, I haven’t re-listed sold out items yet. Was kind of hoping to make some new up-to-date photographs, but the days have been so busy (and incredibly dark and short) that I just haven’t had a proper chance yet.

So, if you like something that’s sold out, feel free to ask for it anyway! I even have some fresh acorns left to replenish the supplies some more 🙂

We are to participate in our first Etsy pop-up event! It’s taking place in Helsinki, Finland – there is a small exhibition space called Akkuna in the Lasipalatsi (Glass Palace). How great is that? So, now we are busy building up some stock to sell there – Golden Chestnut Ornaments, Golden Chestnut Necklaces, Silver Acorn Ornaments, Acorn necklaces and earrings plus a selection of cards, especially some Christmas cards. I’m thinking of this and a cat version of it, which is not up at the shop yet (there have been just zero sunshine recently and I don’t have a very good alternative for lighting to take product photographs…) and this card as well. I hope my sister will draw up some brand new cute cat themed cards and maybe I’ll send a couple of the flowerpot series as well.

So, there’s been that, and some regular everyday life business. In short – I’m trying to apologise for the longer-than-usual silence in this blog here.

I’d also like to introduce this year’s collection of silver (and some golden) acorn ornaments. They were already linked and mentioned above, but this here is the picture time: 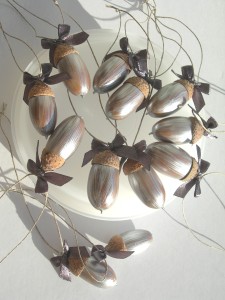